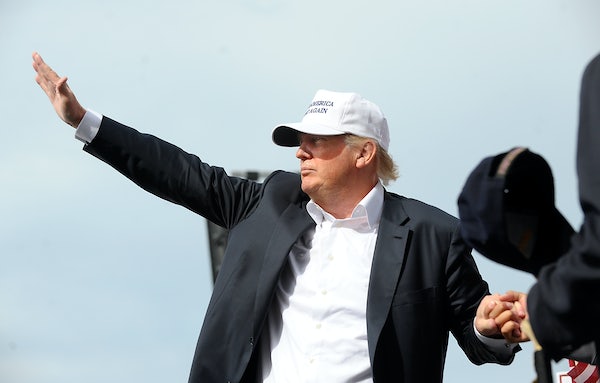 Donald Trump has confirmed he’s a scary fascist. Now what?

It is not a coincidence that Trump unveiled his proposal to bar all Muslims from entering the United States—because they have “no sense of reason or respect for human life”—on the same day that France’s National Front made historic gains in local elections. The far right is having a moment, thanks to anxieties over terrorism and mass immigration that have now been perfectly intertwined.

The difference is that the National Front is not pretending to be anything but a far-right party, while Trump represents a faction of the larger Republican Party, which in its modern iteration has relied on a coalition of the wealthy, social conservatives, and what have been politely referred to as ethno-nationalists. In giving unfettered voice to the latter, Trump is blowing up the whole arrangement, forcing the likes of Dick Cheney—who could be rather cold-blooded about these issues!—to say Trump’s position “goes against everything we stand for and believe in.”

In this respect, Trump is a valuable political science experiment. How many Republicans will continue to follow what has become an unapologetically bigoted campaign? How will the GOP survive, now that it’s being shrunk from without due to demographic changes, and split from within by an emboldened hard core? And can anyone, at this point, hold this party together without bowing to its demons?