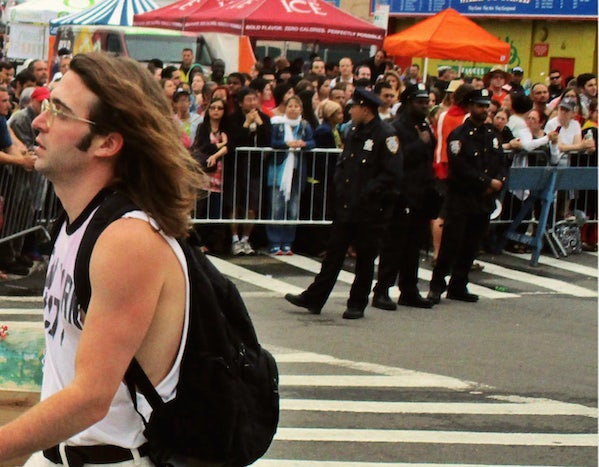 When did you first realize you looked like John Lennon?

I was waiting for the Amtrak to Boston maybe three years ago. A homeless man was hassling me, asking other people in Penn Station, “Who does he look like? He looks like that guy.  That Beatle. That Beatle guy! Doesn’t he look like that Beatle guy?” He wouldn’t stop pointing at me. And then he came up to me and goes, “You know who you look like.”

[That’s when] I realized the extent of this. I was really evoking and channeling John Lennon for so many people and it didn’t matter what their demographic, they all saw it.

It really started happening when I turned like 26, 27. ... I’m just a few years shy of that age that he took that iconic rooftop photograph in a New York City ringer tee.

When did you decide to roll with it?

It came to a head at [this summer’s Coney Island Mermaid] parade. ... I was wearing the [New York City] shirt to almost provoke the attention, and it completely worked. People were yelling, hooting, like, “Lennon! Lennon! Lemme get a pic!” “Yo John! Yo John!” It was wild.

It’s great. I actually find it a wonderful compliment. And I’m happy to do what I can do. When some people suggest that I be an impersonator, I get really turned off. I don’t think that that’s at all what one is supposed to do when they are born with the visage of John Lennon. You don’t go out and be an impersonator. It’s not like it’s Elvis. It’s John Lennon. You have to be much more chill about it.