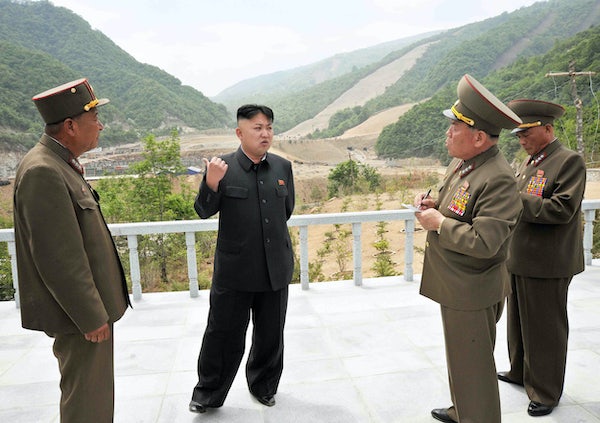 Yes, North Korea is at the Paris climate talks, and yes, Kim Jong-un is acting just as creepy and egomaniacal as you’d expect. According to The Guardian, North Korean Minister of Foreign Affairs Ri Su-yong announced that the country’s Supreme Leader “has declared war on deforestation and has put forward a massive project to turn all the mountains of the country into mountains of gold, thickly wooded with trees.”

While no one should poo-poo a nice tree-planting campaign, it’s interesting that Ri made no mention of his country’s number one source of CO2 emissions: coal. The fuel source amounted to a whopping 93 percent of North Korea’s 2008 CO2 emissions total. But the omission comes as no surprise: as the world’s 14th-largest producer of coal, North Korea relies heavily on the industry for income. It is the third-largest exporter of coal to China, the Regina George to North Korea’s Gretchen Wieners.

And if the trees do get planted, you can bet it won’t be by a team of happy gardeners. North Korea has been repeatedly accused of Nazi-level atrocities against its citizens. Nine of the 15 members of the U.N. Security Council aim to hold a meeting tomorrow on human rights in North Korea, though two major players, China and Russia, might block the session, according to Reuters.