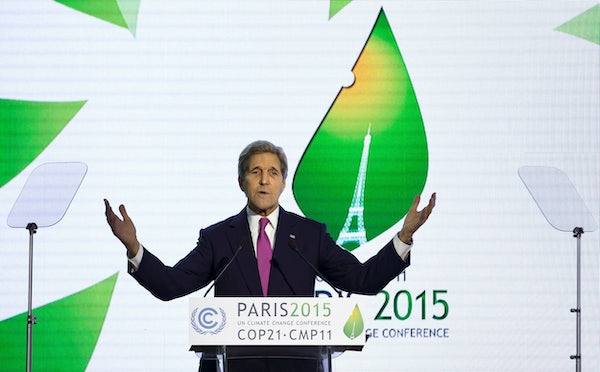 John Kerry told the Paris talks the U.S. is “prepared to do our part” on climate change.

In front of the Paris climate conference on Wednesday, Kerry promised that the U.S. “not only recognizes our role in creating some of this problem but we embrace our responsibility to do something about it.”

But words are not enough, as many environmental critics and developing nations have reminded the Obama administration.

Money is an important way to show the U.S.’s commitment, which is why the State Department also announced it would double grants available to vulnerable countries to $800 million, to help reduce climate risks on infrastructure, water, health, and agriculture. The U.S. “will not leave the most vulnerable nations among us to quite literally weather the storm,” Kerry said.

There were mixed reactions. “The US $800 million he announced, doubling the current commitment, is a positive step but it’s just a drop in the ocean compared to what is needed,” Kyle Ash, senior legislative representative at Greenpeace, said in a statement. “While I appreciate the doubling of U.S. grants for adaptation to more than $800 million by 2020, it is still well below the U.S.’s fair share,” Friends of the Earth U.S. President Erich Pica said. Sierra Club Executive Director Michael Brune had a more positive reaction. “This support helps fulfill the moral obligation we have to aid those directly affected by the carbon pollution disproportionately created in developed countries that is disproportionately affecting developing countries,” he said.