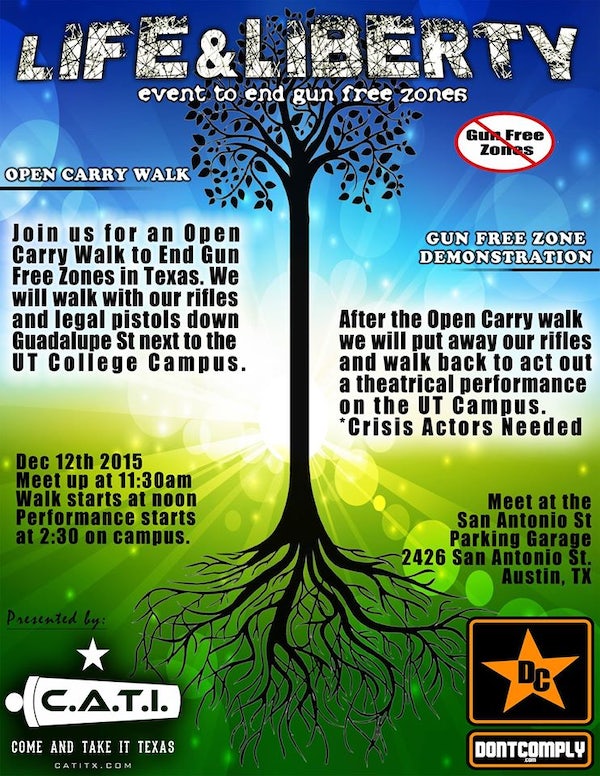 Gun rights groups are going to march with loaded weapons and then stage a fake mass shooting. Got it? Good.

The groups, Come and Take It Texas and DontComply.com, are planning a demonstration at the University of Texas in Austin to protest gun-free zones. “We’ll use fake blood,” said spokesman Matthew Short.

Let me reiterate: Gun rights activists are planning, a mere week after the San Bernardino shooting, to stage a fake mass shooting at a major public university campus to showcase their displeasure with the idea of gun-free zones. From the Facebook event:

We must work to end Gun Free Zones in Texas so Saturday Dec 12th we will gather at 11:30am at 2426 San Antonio St, Austin Texas for an open carry walk with our rifles and legal black powder pistols. At noon we will walk down Guadalupe St next to the UT campus. Ending the walk back at the meet up point, San Antonio Parking Garage. After putting up our guns we will return to the UT campus to put on a theatrical performance starting at 2:30pm. This will be an epic event. See you all there!

According to the Austin American-Statesman, Short said the group did not plan to seek a permit for the event from either the city or the university. “We love freedom and we’re trying to make more freedom,” Short told the Statesman.