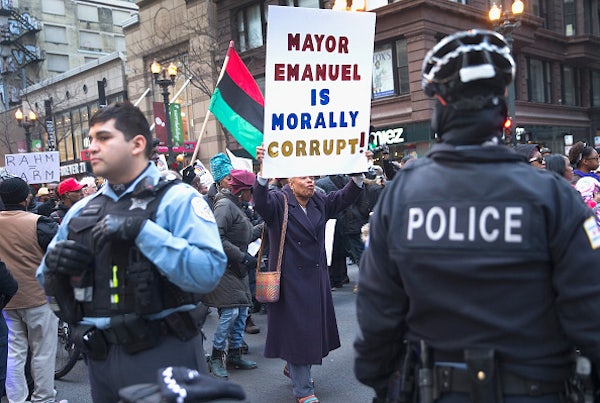 Rahm Emanuel has reached the public apology stage of the Laquan McDonald controversy.

On Wednesday, the Chicago mayor said he was “sorry” for the city’s handling of the October 2014 police shooting of 17-year-old McDonald, the video recording of which was not made public for 13 months, and only then on a judge’s order. “I am the mayor,” Emanuel said in a speech to City Council. “I take responsibility for what happened, because it happened on my watch.”

Emanuel’s responsibility for the apparent cover-up of McDonald’s killing may in fact extend beyond its coincidence with his first term as mayor. But so far, he’s attempted to satisfy demands for accountability with other people’s pelts. Officer Jason Van Dyck was charged with first degree murder just hours before the video went public. Since then, Emanuel has fired Police Superintendent Garry McCarthy and Independent Police Review Authority head Scott Ando, then reversed his previous opposition to a civil rights investigation by the Justice Department.

“Nothing less than complete and total reform of the system and the culture it breeds will meet the standard we have set for ourselves for the city,” he said Wednesday. Emanuel, whose approval ratings have dropped to just 18 percent, is still trying to convince Chicago he’s not a part of that system.