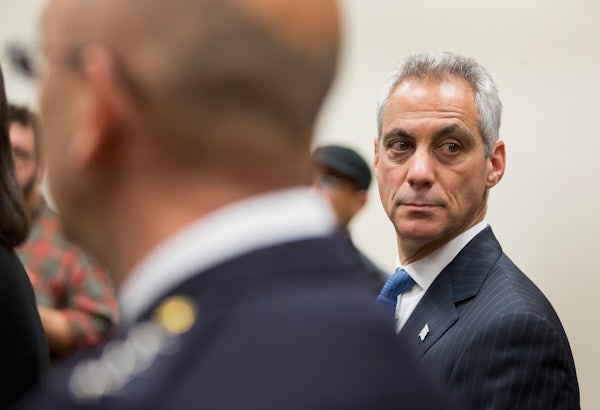 Is this the beginning of a “Recall Rahm” campaign?

On the same day that Rahm Emanuel publicly apologized for the city’s mismanagement of the 2014 police shooting of 17-year-old Laquan McDonald, a Democrat in Springfield submitted legislation calling for an election to recall the Chicago mayor “effective immediately.”

Problem is, there’s no existing procedure for a recall. So the bill introduced by Rep. La Shawn K. Ford (and co-sponsored by Rep. Mary E. Flowers) proposes amending a 1941 state law to allow for a recall election with a “petition signed by a number of electors equal in number to at least 15% of the total votes cast for Mayor in the preceding election, with at least 50 signatures from each ward.”

Emanuel’s reelection bid was pushed to a runoff by challenger Jesus “Chuy” Garcia, in which 590,733 Chicagoans turned out to vote. So should this bill become law, a recall petition would only require 88,610 signatures. This isn’t as challenging as it might seem: Emanuel’s approval rating is hovering around 18 percent.