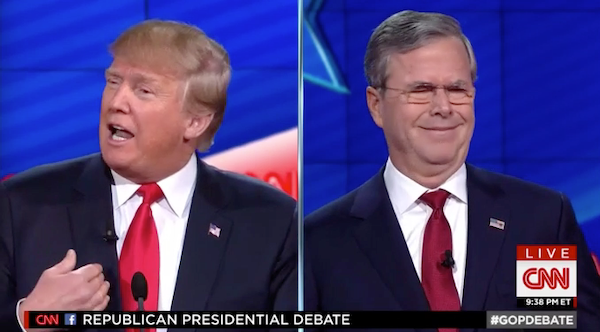 Donald Trump and Jeb Bush finally gave us the glorious manly-man brawl over “toughness” we’ve all been waiting for.

Well, almost. No one hit anybody. But Bush finally challenged Trump as forcefully as he needed to three debates ago. And Trump gave us some beautiful facial expressions showing the strength and maturity he would bring to the White House.

The fight began when Trump defended his call to kill the family members of terrorists. Bush said that was silly. “The idea that that is a solution to this is just crazy.” Then Bush said Trump said “ISIS is not our fight” on September 30. Trump is not serious, he said.

Trump: Am I talking or are you talking, Jeb?

Trump: You can go ahead.

Trump: You interrupted me!

Jeb: Little bit of your own medicine, huh?

Trump: I know you’re trying to build up your energy. Not working. We need toughness. We need strength, we’re not respected as a nation anymore ...

Jeb: Donald, you’re not going to be able to insult your way to the presidency. That’s not going to happen. And I do have the strength!

Later in the debate, the two returned to toughness. “This is a tough business,” Jeb said. “Oh yeah you’re a tough guy Jeb. Real tough.” Trump shot back. And a bit later: “Well I’m at 42 and you’re at 3!” Trump said, referring to poll numbers, like a true manly man hero. “Pretty soon you’ll be off the stage!”