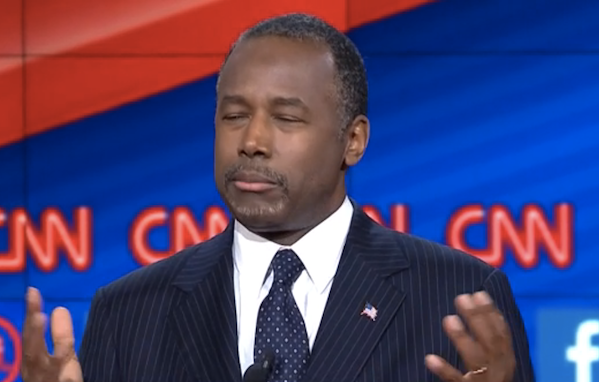 Ben Carson is having another weird debate night.

Questions about Carson’s ability to handle foreign policy have dogged his campaign for months. And in every Republican debate so far, the presidential candidate has had a tendency to drop out of the conversation for large chunks of time, reinforcing Donald Trump’s repeated jabs that he’s too sleepy to be president. But Carson promised tonight would be different—earlier today he said it would be a “slam dunk.”

Instead what we’ve gotten is more Carson weirdness. He began his opening statement by asking for a moment of silence in “remembrance of the San Bernardino victims.” It lasted only a few seconds.

Then, asked if we should be monitoring American mosques, he uttered this incredible sentence, which reads like it came from an Islamophobic Finnegans Wake:

Later, when asked if he would be comfortable ordering strikes that could result in the deaths of hundreds of children, Carson claimed that, having met refugees, he believed they would understand:

CARSON: You know, later on, you know, they really realize what’s going on.By the same token, you have to be able to look at the big picture and understand that it’s actually merciful if you go ahead and finish the job, rather than death by 1,000 pricks.

HEWITT: So you are OK with the deaths of thousands of innocent children and civilian? It’s like...

And then, when pushed on what’s either his greatest weakness as a candidate or his greatest strength—his lack of political experience—Carson quickly devolved into complete nonsense, saying, “I do things, look at the things, I do.”

“I don’t do a lot of talking. I do a lot of doing. ... some people say you’re weak because you’re not loud and you’re not boisterous. But the fact of the matter is, look and see what I’ve done.”

Oh, and he keeps coughing into the mic, which is totally unpresidential.