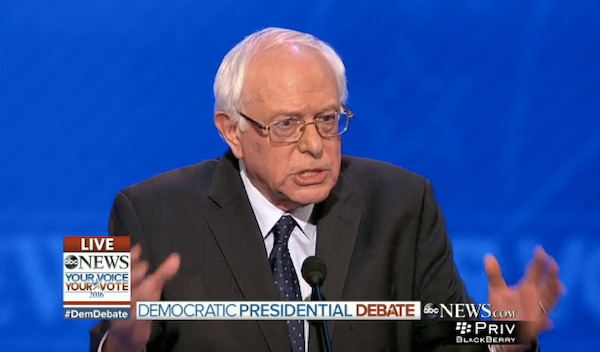 Bernie Sanders and Donald Trump have the same position on America being the world’s policeman.

They both don’t like it. In the Democratic debate tonight, Sanders said, “the U.S. can’t be thought of as the policemen of the world.” He opposed not only the most recent Iraq war, but Desert Storm, too. Sanders said the rest of the world thinks they can “just call up the American military and the American taxpayers” and have us send troops. If the U.S. gets stuck in the Middle East for the next 30 years, he imagines Europe thinking, “No problem.” Saudi Arabia should fight ISIS, he said. So should Qatar, instead of spending billions on the World Cup.

This is almost exactly Trump’s position. He even uses the same language. On Meet the Press in August, Trump said:

Why isn’t Germany, Chuck, leading this charge? Why is the United States? I mean, we’re like the policemen of the world.

“We are going to have to stop being the policemen of the world,” Trump said in September. In a different interview, Trump said, “Let Syria and ISIS fight. Why do we care? Let ISIS and Syria fight. And let Russia, they’re in Syria already, let them fight ISIS.”

The similarity in language is not just about opposing dumb wars. It’s that they both suggest there’s a simple solution—let Rusia figure it out! spend the soccer money on counter-terrorism!—and that someone else will fix the problem.