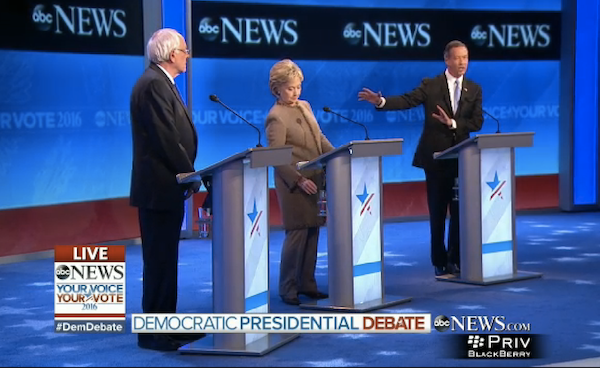 No refugee religious tests for Clinton and O’Malley, thanks.

Asked during Saturday’s debate about their positions on U.S. governors who have, in spite of their relatively limited legal capabilities, vowed to reject Syrian and Iraqi refugees due to nebulous security concerns, Clinton and O’Malley called for the continuation of the existing refugee resettlement program.

“I do believe we have a history and a tradition that is part of our value system,” Clinton said, of accepting refugees. “We don’t want to sacrifice our values. We don’t want to make it seem as though we are turning into a nation of fear instead of a nation of resolve. So I want us to have a very tough screening process, but I want that process to go forward.”

O’Malley, meanwhile, obnoxiously reminded the crowd he was the first of the three Democratic candidates to call on the U.S. to accept 65,000 refugees, and further affirmed support for continued acceptance of said refugees.

Notably, neither Clinton nor O’Malley called for any religion-specific preference or test for refugees, though O’Malley did zero-in rhetorically on Chaldean communities, which are Christian.

Sanders, one presumes, also opposes religiously vetting refugees, but he was unfortunately shushed before he could confirm that on stage.