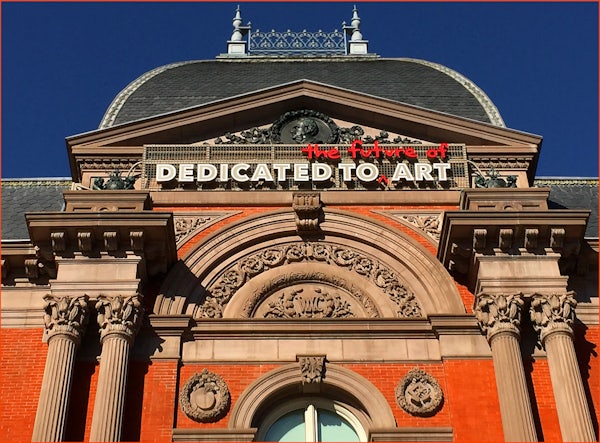 Is this the ugliest museum sign in the country?

When the Smithsonian’s Renwick Gallery in Washington, D.C., reopened last month, it celebrated the occasion with a garish sign over the entrance to the nineteenth-century building that reads “DEDICATED TO ^the future of ART.” Kriston Capps at Washington City Paper called it a “searingly ugly sign” and The Washington Post’s Philip Kennicott said the building was “defaced with a silly addition.”

Although the NCPC and CFA are asking the world’s largest museum complex to bring the signs to their boards for approval, the Park Service is appealing to the Smithsonian’s wallet, suggesting the institution’s failure to comply jeopardizes a $335,000 grant awarded in 2010.

The Smithsonian is being tight-lipped; a spokeswoman would only tell the Post that the institution hasn’t replied to the Park Service. This will likely be settled by lawyers, which could take just as long as the sign’s planned run: up to a year.