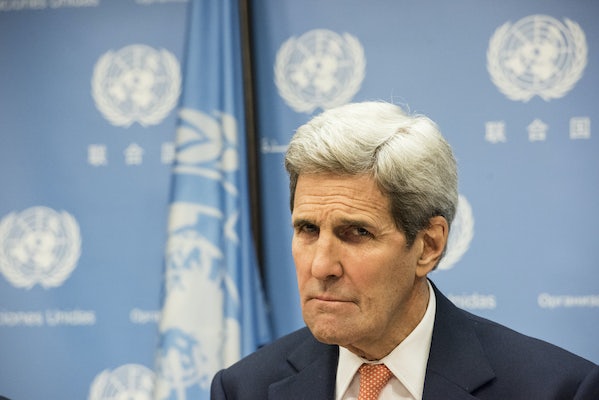 The conflict in Syria has claimed more than 250,000 lives and displaced millions of people. Yet, as Politico reports, State Department spokesman John Kirby chalked it up as a win in a year-end review of the department’s accomplishments.

“The United States and many members of the international community have stepped up to aid the Syrian people during their time of need—the United States has led the world in humanitarian aid contributions since the crisis began in 2011,” Kirby wrote.

The U.S. is also “winning [the] fight against violent extremists,” Kirby wrote, which, thanks to that devilish “ing” ending, isn’t technically false—”winning” is more of an attitude, after all, an ongoing process, and who knows how long it might take until we’ve finally “won,” really?—but also doesn’t seem quite true either.

Earlier this month, the U.N. Security Council embraced a plan for a cease-fire and peace process in Syria, and it has said it intends to move forward with peace talks at the end of January. But continued violence has threatened to derail that process.

Today, at least 32 people were killed and 90 were wounded in two bomb attacks in the Syrian city of Homs, Reuters reports.

On Monday, State Department spokesman Mark Toner told reporters that the 2015 year in review didn’t mean to imply that all is now right with Syria. The Washington Examiner reports:

“The operative word there is ‘bringing,’ not brought,” Toner told reporters.

“So we’re bringing peace and security to Syria, I think that is a truthful claim,” he added. “There has been significant process, we believe, in the past year, on both fronts.”

When asked to clarify if he meant progress or process, Toner said “both.”

“I mean, I think progress on a process,” he said. “I don’t think anyone would say that we are there, or across the finish line. If that was conveyed in anyway, that’s a mistaken impression.”