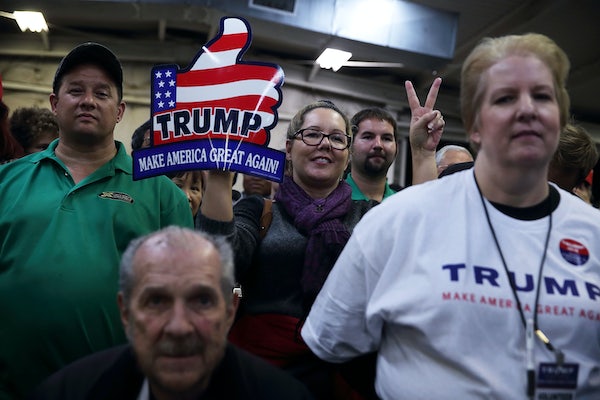 Trump’s strongest supporters are the older, white voters that Democrats have lost.

While Trump has wide-ranging support across all big demographic groups, his fiercest supporters are registered Democrats who now identify as Republicans, according to The New York Times’s analysis of data from Civis Analytics, a Democratic firm that polled more than 11,000 Republican-leaning voters:

Mr. Trump appears to hold his greatest strength among people like these—registered Democrats who identify as Republican leaners—with 43 percent of their support, according to the Civis data. Similarly, many of Mr. Trump’s best states are those with a long tradition of Democrats who vote Republican in presidential elections, like West Virginia.

It’s a group of voters “concentrated in the South, Appalachia, and the industrial North,” compromising much of the old Southern Democratic coalition that Dems have been losing for decades, but which has all but disappeared in the Obama era. The voters tend to be older, whiter, and, as the Times very gingerly explains, more racist than your average American.