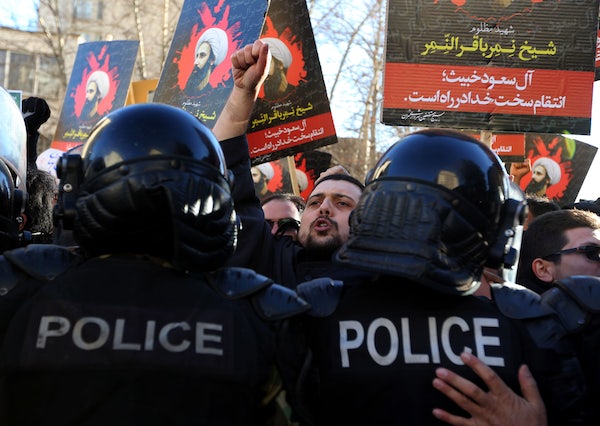 Tensions between Iran and Saudi Arabia continue to escalate.

Saudi allies Bahrain and Sudan have cut ties with Iran and the United Arab Emirates has downgraded its diplomatic mission and is decreasing the number of diplomats in the country. Saudi Arabia announced it was cutting diplomatic ties on Sunday, after Iranians protesting the execution of Sheikh Nimr, a popular nonviolent Shiite cleric, set fire to the Saudi embassy in Tehran.

Iran, the most prominent Shia state in the Middle East, and Saudi Arabia’s ruling Sunni family, the al-Sauds, have been rivals for decades. Both countries are currently locked in a proxy war in Syria, where Iran supports Bashar al-Assad’s regime and Saudi Arabia backs Sunni rebel groups, and to a lesser extent in Yemen, where Saudi Arabia supports the government against Houthi rebels. The two countries have also backed rival groups in Iraq along similar sectarian lines over the past 13 years. (The conflict between the two states is not just theological though.)

Ironically, the recent nuclear deal between the United States and Iran, which was aimed at lowering tension in the region, may have inflamed tensions between Saudi Arabia and Iran, as the Saudis are not thrilled about any form of reconciliation between their most important ally and their bitterest rival. Whatever you want to call it—a new Cold War, a 21st century Great Game—the power struggle between Iran and Saudi Arabia has rarely been this explicit.