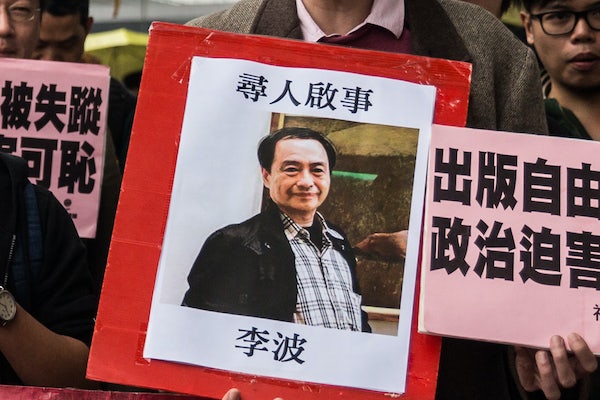 Since mid-October, five employees of Mighty Current Media and the affiliated Causeway Bay Bookstore have gone missing one by one. The most recent alleged abductee is Mighty Current editor Lee Bo (pictured above), who vanished last Wednesday. Although Bo’s wife has recanted her missing persons report after receiving a questionable letter from her husband, her position as co-owner of Mighty Current Media means that it might be in her best interest to drop the case.

The disappearances have been chalked up to the publisher’s penchant for releasing scandalous books that expose the private lives of the mainland’s political elite. With titles like Overseas Mistresses of the Chinese Communist Party and Secrets of Wives of Chinese Communist Party Officials, the books are most popular with mainland tourists visiting the city. Even though the link between banned books and the missing employees hasn’t been fully established, it’s clear that the intimidation tactic is working. The South China Morning Post reported that another Hong Kong book store has stopped selling banned titles.