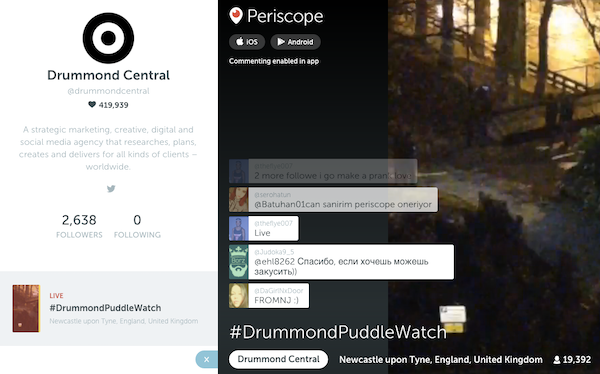 Tens of thousands of people are watching a puddle on Periscope right now.

In England, french fries are chips and biscuits are lorries and everyone is ruled by a baby and her adorable omnipotent great-grandson George. It’s a strange country! It’s also a very wet one, which helps explain why thousands of people are watching a giant puddle in Newcastle-upon-Tyne right now.

It is, admittedly, fascinating to watch. It’s like peeking in on a psychological experiment: A pedestrian’s decision to either tromp through the puddle and get wet, try to circumnavigate it (despite it being very big!), or just stand on the outskirts and stare into the (few inches deep) abyss surely says something about human behavior. (The puddle’s majesty has dimmed somewhat by the presence of members of the press, who are snapping photographs of it like it was some kind of inanimate carbon rod.)

Go watch the puddle before it swallows the whole of England.