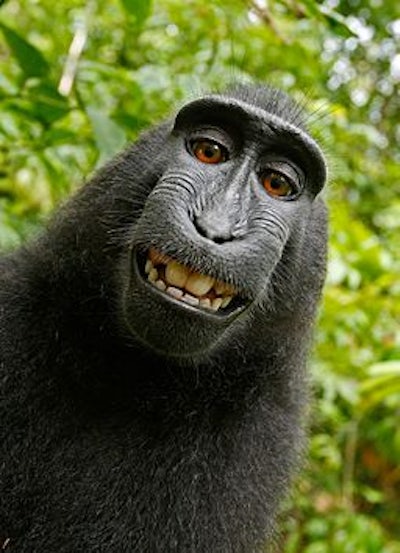 No, a monkey can’t copyright a selfie.

A federal judge plans to dismiss a copyright infringement lawsuit filed by the ever-trolling People for Ethical Treatment of Animals on behalf of an Indonesian monkey who took his own photo, NPR reports. PETA sued a British photographer who was shooting in Indonesia when the macaque tripped the shutter. U.S. District Judge William Orrick dismissed the lawsuit, arguing that Congress had never intended that the rights under the Copyright Act be applied to animals. But he’s having some fun with the lawsuit first, based on his preliminary ruling:

A monkey, an animal-rights organization, and a primatologist walk into federal court to sue for infringement of the monkey’s claimed copyright. What seems like the setup for a punchline is really happening. It should not be happening. ... Monkey see, monkey sue is not good law—at least not in the Ninth Circuit.

Wikipedia argues that the image is in the public domain “because as the work of a non-human animal, it has no human author in whom copyright is vested.”