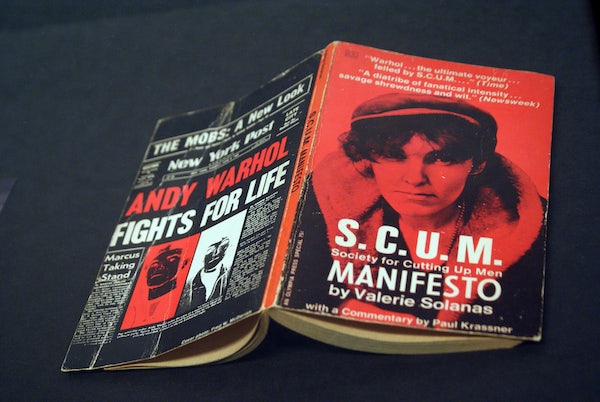 It’s short, it’s beautiful, it’s contradictory and offensive, and no one can decide how it should be read. But the most important thing about Valerie Solanas’s tract, first published in 1967, is its fury. Solanas makes big, unreasonable claims, calling on “civic-minded, responsible, thrill-seeking females only to overthrow the government, eliminate the money system, institute complete automation, and destroy the male sex.”

The book that Watson chose—Gloria Steinem’s My Life on the Road—shows an established writer looking back on a life lived successfully, according to once-radical principles. Solanas’s book looks ahead to a still unformed life, one that would lead to disaster many times (in 1968 she was convicted of “reckless assault” after shooting Andy Warhol), but still had radical, liberating possibilities.

If the readers who join Watson in her feminist book club truly want the world to change during their lifetimes, it feels like they’ll need to start angry.