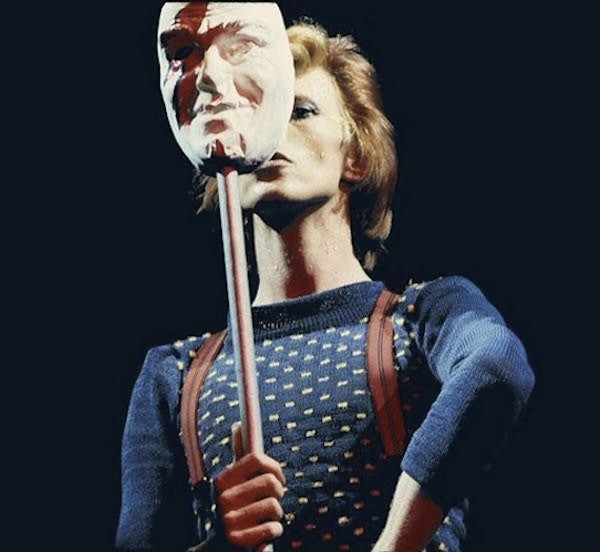 One of rock music’s most notorious documentaries, Cracked Actor follows Bowie on his incredibly ambitious Diamond Dogs tour, which took place while the musician was famously, by his own admission, living off of “cocaine, milk, and red peppers.”

Cracked Actor is not a great film—it’s rough and more or less formless. Bowie was out of his gourd in 1974, as this self-parodic exchange with the film’s director shows:

Yentob: Since you’ve been in America, you seem to have picked up on a lot of the idioms and themes of American music and culture. How has that happened?

Bowie [looking at a milk carton]: There’s … there’s a fly, floating around in my milk! It’s a foreign body in it, you see, and it’s getting a lot of milk. That’s kind of how I feel. I couldn’t help but soak it up.

For his part, Yentob does not have a gift for subtlety—Cracked Actor is constantly interrupted by on-the-nose shots, like Bowie trying on masks. (Get it?)

But Cracked Actor is notable because it shows Bowie in a transitional period, between Diamond Dogs and the start of his most important creative period, which would produce the Berlin Trilogy. For all the talk of Bowie as a chameleon, we rarely think of him shifting shapes—we remember instead a parade of personas: the Thin White Duke, the Goblin King, Ziggy Stardust. But Bowie was intensely liminal and restlessly creative—Cracked Actor gets at that aspect of his persona better than anything, even if it isn’t very good.