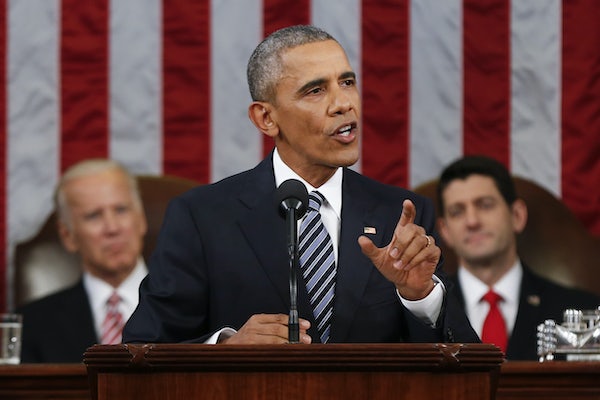 “This isn’t a matter of political correctness.”

The anti-establishment wave in presidential politics is laying bare the fragile feelings of the privileged, who in turn argue that oppressed minorities shouldn’t be so sensitive. Donald Trump’s politics of grievance is only the loudest example of this in the Republican field.

This is the bilious bipartisan climate in which President Obama uttered this about identity politics in tonight’s State of the Union.

That’s why we need to reject any politics—any politics—that targets people because of race or religion. This isn’t a matter of political correctness. It’s a matter of understanding what makes us strong...His Holiness, Pope Francis, told this body from the very spot I stand tonight that “to imitate the hatred and violence of tyrants and murderers is the best way to take their place.” When politicians insult Muslims, when a mosque is vandalized, or a kid bullied, that doesn’t make us safer. That’s not telling it like it is. It’s just wrong. It diminishes us in the eyes of the world. It makes it harder to achieve our goals. And it betrays who we are as a country.

Connecting rhetoric to violence is essential, because to do otherwise would be to ignore reality. I’m glad the president said this. But there was room in this paragraph to talk about police violence and other priorities of Black Lives Matter, as well. Especially given that one of the movement’s co-founders is in the house tonight.