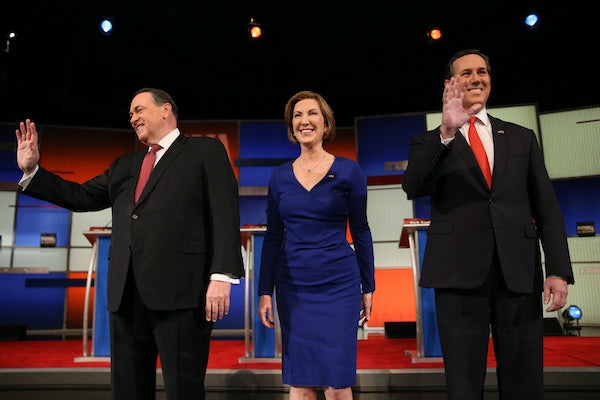 For a bunch of people who definitely won’t be president, the undercard debaters sure are taking this thing seriously.

When Lindsey Graham suspended his campaign in late December, I worried that the Republican undercard debate would suffer for his absence. Say what you will about Graham’s candidacy (and there’s probably not much to say), but he had energy, and his snipes nearly made the undercard debates bearable.

Thursday’s undercard debate is the smallest yet. With Rand Paul sitting out in protest (or perhaps sitting out to avoid the indignity), only three candidates are on the stage: former Iowa Caucus winners/current aspiring Duck Dynasty guest stars Rick Santorum and Mike Huckabee, and failed printer CEO Carly Fiorina. But it’s been feisty so far. That feistiness seems to come from desperation more than anything else—though Rick Santorum’s body language and speech patterns suggest he slammed at least a dozen shots of espresso before the debate—and it seems like all three candidates realize that this is their last chance to make any kind of impact on the race.

Fiorina opened with what was arguably the most sexist comment in a race that’s been full of them: her jab at Hillary that, “Unlike some other women in this race, I actually like spending time with my husband.” But the first half hour of this debate has felt like a trip down Conservative Meme-ory Lane. There have been multiple references to Benghazi (including a plug for Michael Bay’s thriller Beard Team Six from Santorum!) and Fast and Furious, and Mike Huckabee just said President Obama is “more interested in protecting the image of Islam than he is about protecting us.” These three candidates are desperate to connect with the most vocal elements of their electorate—and it shows.