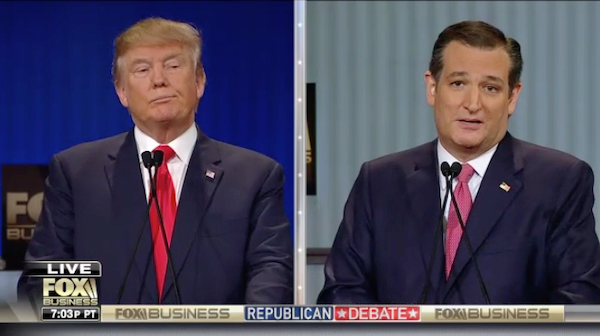 There were about 11 different layers of identity politics in Donald Trump and Ted Cruz’s fight over whether New Yorkers are good.

The candidates were battling for the title of “one of us” from the South Carolina audience in the Republican debate on Thursday night. Let’s pick each moment apart.

1. Moderator Maria Bartiromo asked Cruz what exactly he meant by “New York values,” and Cruz said, “I think most people know exactly what New York values are.” Real people, like you in the audience.

2. “I am from New York,” Bartiromo said, with New York pride.

3. “You are from New York so you might not,” he replied. You are not one of us. “But I promise you that here in South Carolina they do.” The audience cheered. But I am one of them!

4. “Everyone understands that the values in New York City are socially liberal, pro-abortion or pro-gay marriage, focused around money and the media,” Cruz said. Everyone means everyone but New Yorkers. (Was the money and media thing a reference to Jews?)

5. Cruz noted Trump had played Bruce Springsteen’s “Born in the USA,” a reference to Cruz being born in Canada, and thus not one of us.

6. But, Cruz implied, Trump is falsely claiming to be one of us, because in an interview several years ago, he said he shared the beliefs of New Yorkers and did not have “Iowa values.” We are not Iowa but we are more like Iowa than New York.

7. “Not a lot of conservatives come out of Manhattan!” Cruz said. It is not Canada that is an anti-us birthplace, but Manhattan.

8. William F. Buckley was from Manhattan, Trump said. The patron saint of us.

10. Then Trump reminded us that 9/11 happened. No city could have handled 9/11 “more beautifully” he said, to applause. All of us think 9/11 was bad. (Not counting the Muslims he falsely claimed celebrated 9/11 in New Jersey.)