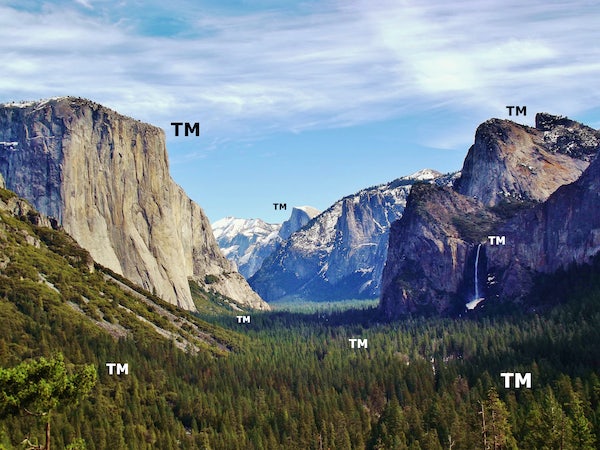 The National Park Service is being “held hostage” by Yosemite’s long time concessionaire, a company called DNC, for trademarks on many of its iconic properties, including the Ahwahnee Hotel, which will now be renamed “Majestic Yosemite Hotel” to avoid infringement.

Now, I’m no lawyer, but I think this could have been the government’s first problem:

DNC alerted NPS that since 2002 it had been trademarking the names of places throughout the park where the concessionaire worked—the many lodges, the ski hill—and also trademarking images and designs related to the park. In responding to why the government hadn’t already trademarked those assets, [DNC] wrote in an email that the “general thought was that names of buildings go along with the buildings, and no trademarks were necessary. [DNC] filed for trademarks without telling NPS, and we thought buildings and names went together.”

The biggest problem of all? DNC also trademarked “Yosemite National Park.” No word yet on who will step in to solve this naming crisis, through “Comcast-Verizon Presents Chipotle’s Natural Park of X-Treme Wonder” has a nice ring to it.