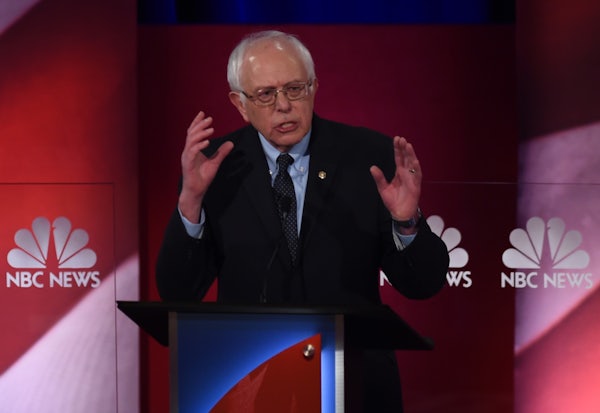 Bernie Sanders’s fixation on Wall Street prevented him from focusing on systematic racism.

A telling moment occurred in the debate when the issue of systematic racism in the criminal justice system was brought up. Hillary Clinton made a strong statement about the extent to which the system is biased against African American men, one in three of whom could end up in prison. Clinton’s words could be seen as either impressive or hypocritical, given the role her own tough-on-crime politics played in building up the incarceration state.

But when Sanders took up the topic, he didn’t needle Clinton for her inconsistency or try to take a different position. He echoed her words, slightly watered down (not using the phrase “systematic racism”). And he quickly pivoted to his favorite theme, the crimes of the Wall Street elite.

There’s no question that income inequality and the undue power of the rich are the heart of the Sanders campaign. And it’s a fair point to contrast mass incarceration with the fact that Wall Street misconduct goes woefully under-punished. Still, by making that pivot, Sanders risked coming across as a single-issue fanatic, someone so focused on his pet cause that he can’t see that anti-black racism is in and of itself a problem, whatever happens on Wall Street.