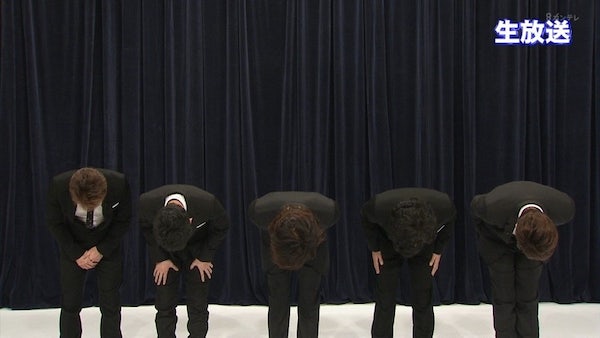 The sickness of Japan, in one groveling apology by the oldest boy band in the world.

Every time I go to Japan, I’m amazed that the same pop stars and tarentos (the Japanese rendition of television “talents”) who were around when I was a kid are still there. So it was with a mixture of recognition and despair that I read the news that SMAP, a “boy” band composed of five olds in their late 30s and early 40s, were forced to apologize on national television on Monday night after it emerged they were considering breaking up.

The story is as convoluted and ridiculous as a Japanese daytime melodrama. But in short it became a national controversy, partly because almost no one in the entertainment industry dares to challenge its calcified conventions. Even Prime Minister Shinzo Abe expressed relief that the gang is staying together, despite the fact that the group’s apology bore all the hallmarks of a hostage situation. “Starting today, we once again want to make you smile,” said one member, Shingo Katori, unsmiling.

As one blogger, economist Nobuo Ikeda, wrote, according to the Japan Times: “This is Japanese society in miniature,” where workers are absorbed into their companies at a young age and stay there in perpetuity. He added, “As companies rarely hire mid-career, this situation is like the entertainment industry where those who go independent will never have a second chance.”