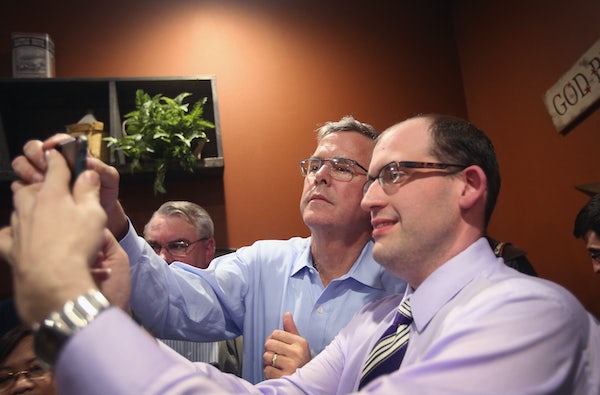 The Jeb Bush super PAC seems to be run by hipsters who love retro technology.

Bush loves to flaunt how high-tech he is, even appearing in a video where he goofily says he uses a  “Macbook Pro, baby.” But there’s always something a bit off about his claims to being on the cutting edge of the digital age. He released a 730-page e-book of his emails, as if mastering a form of communication that is more than a quarter-century old is supposed to be impressive.

And now, in the age of Vine, the Right to Rise Super PAC allied with his campaign is couriering out a video player (loaded with a pro-Bush video) to lucky voters in Iowa and New Hampshire. Bush’s campaign is super-loaded with cash but has so far been unsuccessful at winning voters, so this move might smack of desperation. But according to sources close to the campaign, the video players are “amazingly cheap” and “far less than a good bottle of scotch.”

Although, given the hassle of disposing old machines, maybe the Bush campaign would have won more good will by mailing out good bottles of scotch to Iowa and New Hampshire residents.