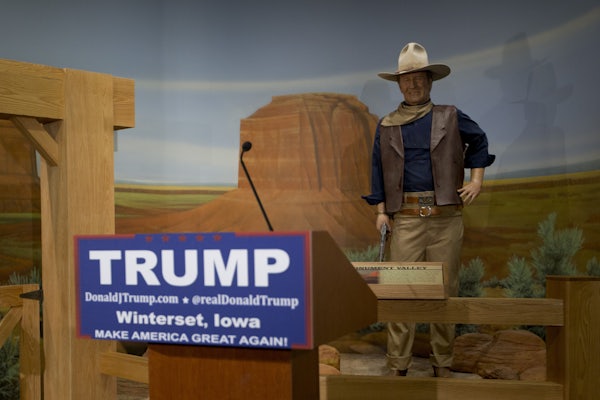 John Wayne would have loved Donald Trump since both men are racists.

Members of John Wayne’s family have endorsed Donald Trump, saying the Duke would have loved the Donald. But this endorsement raises questions about what exactly connects John Wayne with Trumpism. Wayne was an outspoken defender of white identity politics, as is Trump. Or to put it in Trumpian terms, Wayne was not politically correct.

And in a famous 1971 interview in Playboy, Wayne expressed ideas that even Trump might blanch at:

I believe in white supremacy until the blacks are educated to a point of responsibility. I don’t believe in giving authority and positions of leadership and judgment to irresponsible people....

I don’t feel we did wrong in taking this great country away from [Native people], if that’s what you’re asking. Our so-called stealing of this country from them was just a matter of survival. There were great numbers of people who needed new land, and the Indians were selfishly trying to keep it for themselves.