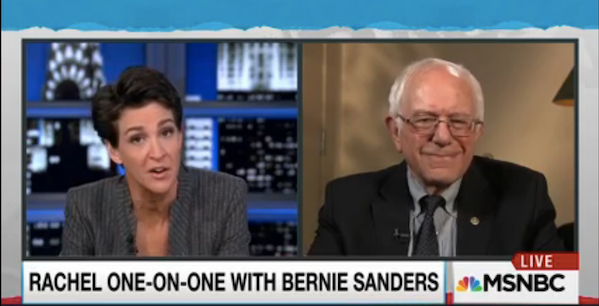 Responding to a question from MSNBC anchor Rachel Maddow Tuesday night about whether he was competing for the endorsements from groups like Planned Parenthood, NARAL Pro-Choice America, and the LGBT organization Human Rights Campaign, all of which have endorsed Hillary Clinton for president, the senator from Vermont said this.

Sanders is polling higher than Clinton with millennial women, but this was an unforced error. Granted, many on the left have some serious criticisms of HRC, in particular. But it is odd for anyone running for the Democratic nomination to respond to Maddow’s question by branding those organizations as something to be resisted.

The trap Sanders falls into here is a common one that has plagued him throughout this campaign: Faced with a question he either isn’t prepared for or seeks to dodge, he defaults to his core anti-establishment message. It works when he’s railing against Wall Street or, to a lesser extent, structural racism. It fails particularly when he’s labeling the embattled Planned Parenthood, the target of a terrorist attack two months ago, as part of the “political establishment” because it is not backing his candidacy.

Sanders also hasn’t yet called for the abolishment of the anti-abortion Hyde Amendment, as Clinton did last week. I’ve requested comment from his campaign, and await their call.

“I’m disappointed in Senator Sanders’s remarks last night. This country sees attacks against reproductive health, reproductive rights, and marriage equality every day—especially from every single GOP candidate for President. It’s regrettable, and surprising, to hear Senator Sanders describe the very groups that fight on behalf of millions of often marginalized Americans—people who still have to fight for their most basic rights—as representing the ‘establishment.’ Reproductive health care and rights, and the full equality of LGBTQ people, are core progressive values that should unite us all.”