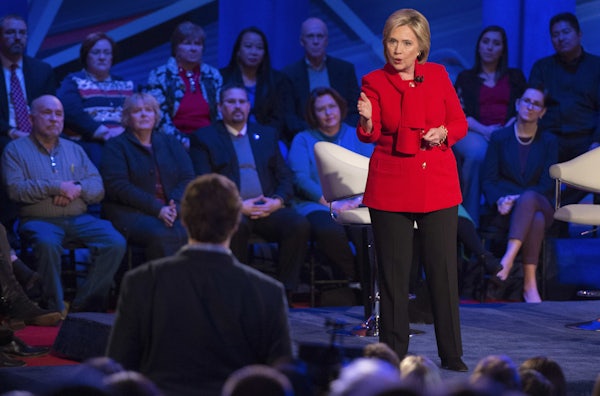 Hillary got the toughest question of the night, and she handled it like a pro.

When a Sanders-leaning voter at CNN’s Democratic town hall asked Clinton about charges that she is dishonest and double-dealing, Clinton launched into a short review of her long, committed political career.

“They throw all this stuff at me and I’m still standing,” Clinton said. “I’ve been on the front lines of change and progress since I was your age. I have been fighting to give kids and women and the people who are left out and left behind the chance to make the most of their own lives.” Clinton went on to reflect on her time rallying for expanded healthcare coverage as First Lady: “I’ve taken on the status quo again and again. I’ve had millions of dollars spent against me... The drug companies, the insurance companies spent millions against me.”

Clinton closed by adding that “if it were easy, hey, there wouldn’t be any contest. But it’s not easy... You have to have somebody who is a proven, proven fighter. Somebody who has taken them on and won.”

Here she was at her best because she wasn’t making any effort to present herself as especially millennial-friendly or fresh. She was presenting herself exactly as she is: a politician who’s spent a lot of time in the trenches, whose station and experience in the halls of power you either take or leave.