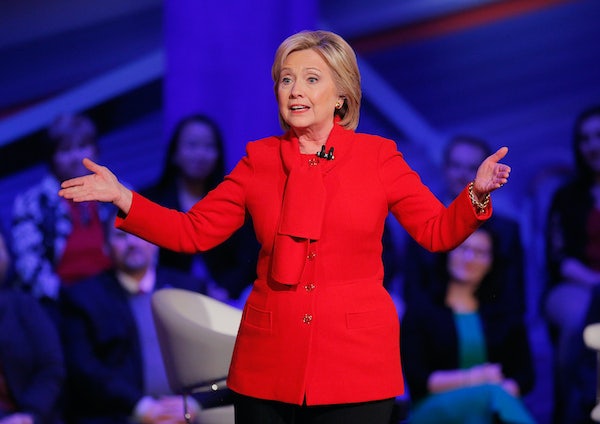 Hillary’s new strategy: Everything about Bernie is great.

At Monday evening’s Democratic town hall, Clinton faced two potentially awkward questions: a young man asked why she struggled with young voters who thought she was dishonest and Chris Cuomo asked what she thought of a clip of Bernie Sanders’s new campaign ad (the one with Simon & Garfunkel’s “America” and all the pumped-in crowd noise). Clinton was feisty throughout the evening—she was easily the most energetic candidate on the stage—but in both instances Clinton deflected with the same remark: “I think it’s great.”

This may be Hillary’s take on Ted Cruz’s strategy against Donald Trump and Ben Carson: “to bear hug both of them, and smother them with love.” Clinton got hit hard from the left after she went after Sanders’s health care proposals, and it’s possible that she’s decided that it’s not worth alienating the left. But Clinton attacking Sanders from the right always felt like a pivot from the primary toward the general election. It’s now clear that that move was premature, and her newfound love for Bernie may just be an acknowledgment of that.