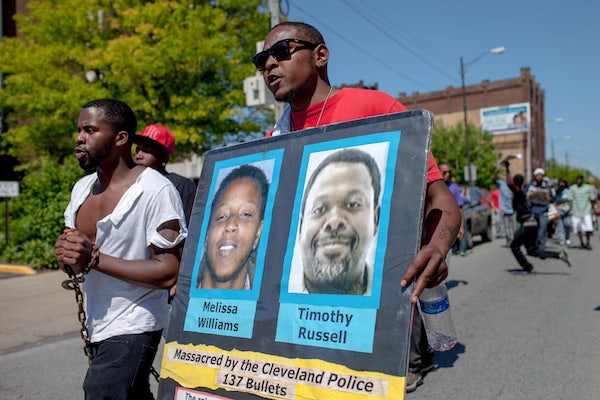 To account for one way in which the modern black liberation movement has made a difference, think about why Timothy Russell and Melissa Williams aren’t as well known as Michael Brown and Sandra Bland. They would be household names had they died today, unarmed, in a hail of 137 bullets fired by police. But they were killed in November 2012 by Cleveland cops after a lengthy, dangerous chase.

Their deaths triggered the mayor to request that the Obama administration investigate his own police force. Due the Department of Justice’s findings of excessive force, the department is now subject to scores of reforms. But the 137 bullets didn’t attract much national attention until Michael Brelo, the only officer to be charged with a crime in the matter, was acquitted of voluntary manslaughter last summer. He’d fired the most shots at Russell and Williams, 49 in total.

Brelo and five of his fellow officers involved in the incident have finally been disciplined. The city on Tuesday recommended that six Cleveland police officers, including Brelo, be fired and that six more be suspended. “What we talked about from the beginning is that we would conduct a process that had due process and would be fair,” said Mayor Frank Jackson, speaking of the review that began in June.

But he added that he expects the disciplined officers to appeal, lengthening the process for “another few years.” When you’re a Cleveland cop, accountability can be postponed almost indefinitely.