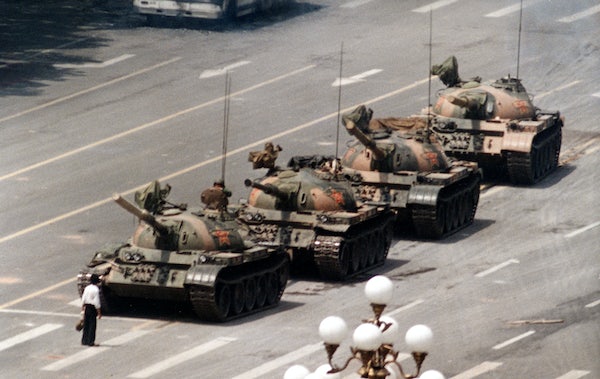 Those famous photos from Tiananmen Square now belong to a Chinese company.

While the rights to certain images from the 1989 massacre and its aftermath, like the one above featuring an anonymous civilian standing up to a line of Red Army tanks, belong to the Associated Press and Reuters, the rights to other iconic photos are now in the hands of Visual China Group following its acquisition of the photography archive Corbis. The New York Times reports that there are concerns that the company will censor such photos, abetting the Chinese government’s attempts to essentially erase the massacre from history books. Furthermore, VCG has made a deal with Corbis’s main rival, Getty Images, to disseminate its photographs all over the world—except China. An official at Getty told the Times he was “confident that the company would safeguard the availability of politically sensitive images.” VCG said it was “fully committed to being a good steward of the Corbis images and will continue to make the archives available globally.”