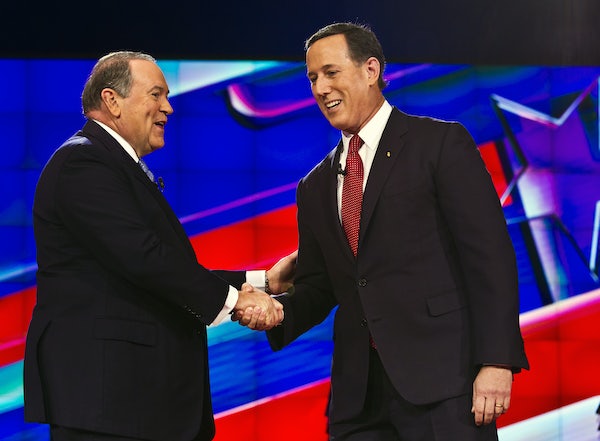 The past two winners of the Iowa Caucuses will join Donald Trump at tonight’s veterans rally/Trumpapalooza.

Fresh off dropping one of the worst singles of all time, Mike Huckabee announced that he would be joining Trump at tonight’s event, which is ostensibly in support of veterans but, c’mon, will be all about his feud with Fox News. Soon after, reports emerged that Rick Santorum would be joining them. Both will participate in tonight’s undercard debate before attending the rally, effectively double-dipping with the GOP establishment and its primary insurgent.

For Huckabee and Santorum, this is an opportunity to draft off of Trump’s support and siphon votes away from their primary family-values, hard-core conservative foe, Ted Cruz. (Huckabee and Santorum have both repeatedly gone in on Cruz throughout the election cycle, while giving Trump a much wider berth.) For Trump, this is a way to raise the profile of his rally at the expense of Cruz. Aside from Fox News, Cruz was the biggest loser when Trump announced that he was picking up his toys and taking them to his own event—Trump has owned the media cycle ever since that announcement, taking two valuable days of coverage away from Cruz, who is running out of time to catch Trump.

These moves make sense for all three candidates, in other words, but that shouldn’t distract from how great this is. Donald Trump’s entry into the Republican race promised chaos and tonight we’re getting chaos in the form of two simultaneous events that are all about Donald Trump.