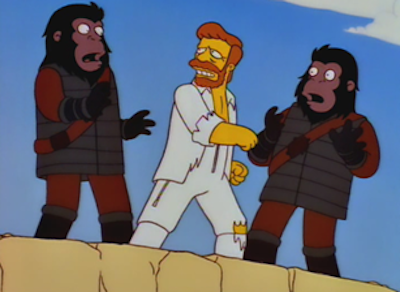 Donald Trump has turned the GOP primaries into the planet of the apes.

Teed off by the the alleged disrespect shown him by Megyn Kelly and Roger Ailes, Donald Trump is boycotting the eighth Republican debate, holding his own counter-event to allegedly raise money for vets.

This latest display of bravado shows that the best way to understand Trump’s shenanigans is not in political terms but anthropologically and zoologically. Trump has taken one of the two leading political parties in the richest country on earth and reduced its disputes to the level of primate brutality. The Republican race is now the planet of the apes. Trump is the Alpha male, the baboon who specializes in humiliating the weaker (or “low energy”) males so he can lead the tribe.

Writing in Politico, Tucker Carlson tells an instructive story about how he had once insulted Trump’s hair on CNN. This led to a phone message from Trump. “It’s true you have better hair than I do,” Trump said. “But I get more pussy than you do.” Alpha males are the ones who, of course, have the most access to the sexual favor of women. And Carlson has responded to Trump’s simian bullying exactly the way a Beta male should, by showing deference; Carlson’s article speaks of Trump with great respect as a supposed truth-teller.

Because Republicans respect primate aggressiveness, Trump is likely to continue to be the top dog—or rather, top monkey.