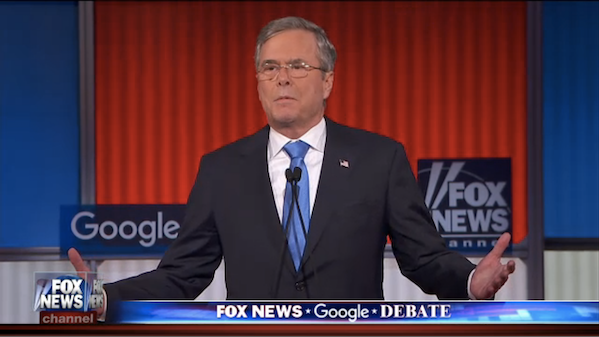 Even with Trump off the stage, Jeb still seems scared of him.

For the past several months, Jeb Bush has arguably been Donald Trump’s biggest target on and off the debate stage. With the exception of the occasional high five, Trump routinely mocked and belittled Bush in debates and has routinely used his low energy and lower poll numbers as a laugh line in debates.

Tonight’s debate was an opportunity for Jeb—this was the moment he could finally escape his tormenter’s shadow and step out on his own. Bush tried to act like he was better than Trump’s attacks by belittling them: He opened the debate by saying “I kind of miss Donald  Trump. He was a little teddy bear to me.”

But Jeb still seems spooked by Trump. In his opening statement he seemed haunted by the specter of Trump, looking over his shoulder to see if the Donald was going to peek through the curtains and make fun of his mom. Or maybe Jeb’s just lost—the most notable part of the past several debates, from his perspective, have been Trump’s jabs. Maybe with no one there to own him, Jeb decided to own himself.