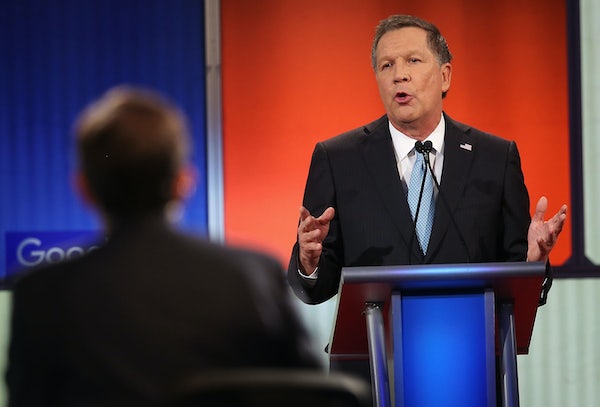 The GOP can’t be bothered with Flint’s water crisis.

Ohio Governor John Kasich, one of two sitting governors on stage at the GOP debate Thursday night, had a long time to prepare a strong answer about the lead poisoning of the water in Flint, Michigan. Yet he still seemed bewildered at how to respond.

“Well, you’ve got to be on top of it right away,” he said. “And, you know, I don’t know all the details of what Rick Snyder has done. I know there have been people who have been fired; people who are being held accountable. But the fact is, every single engine of government has to move when you see a crisis like that.”

There was an interesting point Kasich snuck in there. He said, “You’ve got to work with local communities and you’ve got to work with the federal government.” This is from a candidate who’s offered to freeze every Environmental Protection Agency rule in the long-shot chance he wins the presidency. But he didn’t dwell, because he can’t argue for more regulation, and Republicans don’t feel comfortable slamming a fellow GOP governor.

Kasich certainly isn’t alone in his confusion. Marco Rubio was caught unprepared earlier this month by the question, and he said he hadn’t been briefed. Jeb Bush’s answer was off-key; he praised Michigan Governor Rick Snyder’s response.

Republicans insist everything the EPA does is overreach, which is why it deserves less support and funding ... until there is a crisis. Then they go quiet.