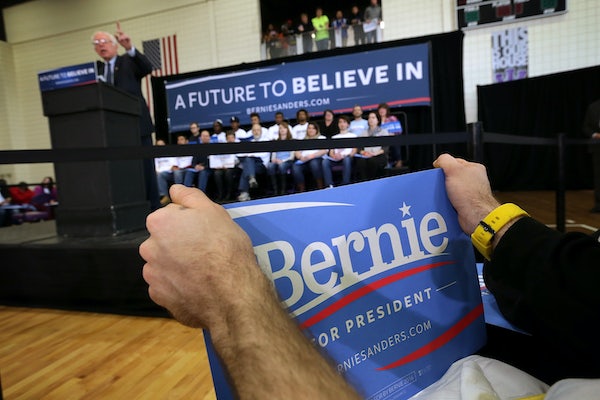 The Sanders campaign knows the “Bernie Bros” are a problem.

At last Monday night’s CNN town hall, a first-time Iowa caucus-goer asked Hillary Clinton a question some considered condescending. To them, it was an example of the peculiar political species known colloquially as the “Bernie Bro” emerging from his natural habitat, the internet. Perhaps, but the real thing is typically much more vitriolic. Finally, the campaign itself is speaking out.

BuzzFeed reported late Friday that the Sanders staff is very concerned about the deleterious effect of the “Bros,” passionate fans who harass and bully Clintonites, as well as those who criticize Sanders or report something that puts him in an unfavorable light.

I’ve found myself in the crosshairs of these guys, especially after I published this last Monday, and it’s a mere taste of what women have had to deal with. This regressive streak has even shown up in his campaign, so I’d like to hear the candidate himself address it.

It’s probably costing Sanders votes. Even if it isn’t, it’s best he admonish the cultish behavior of his supporters when it manifests as trolling, misogyny, and “hipster racism.” It is the right thing to do. If Sanders is attracting support for standing up to the Man, he should also confront some of his own.

The candidate himself told Ebony magazine that “people should not be attacking people,” and apologized for some of the rhetoric of his supporters, especially those who were tearing down thoughtful critiques of his record on race. “We have many hundreds of thousands of supporters, and some of them have gone over the edge,” he said.

I stand corrected. That said, it couldn’t hurt for Sanders to repeat this from the stump.