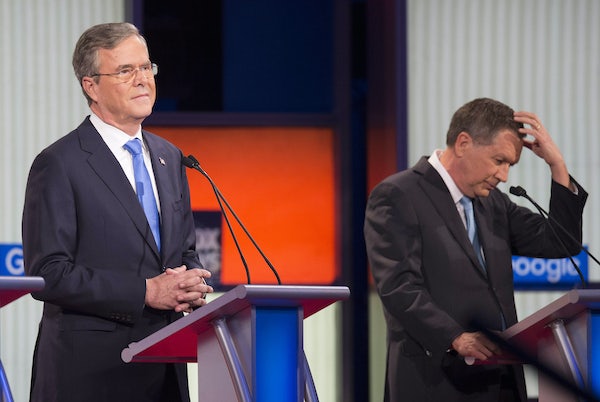 Days before Iowa, the endorsement means every one of Kasich’s opponents has a talking point so obvious it’s almost unfair: The “liberal media” loves him!

The editorial board admits the Ohio governor is an underdog and by no means a moderate. But he gained the paper’s favor by being the the only almost-sane Republican in the race:

Still, as a veteran of partisan fights and bipartisan deals during nearly two decades in the House, he has been capable of compromise and believes in the ability of government to improve lives. He favors a path to citizenship for undocumented immigrants, and he speaks of government’s duty to protect the poor, the mentally ill and others “in the shadows.” While Republicans in Congress tried more than 60 times to kill Obamacare, Mr. Kasich did an end-run around Ohio’s Republican Legislature to secure a $13 billion Medicaid expansion to cover more people in his state.

It’s hard to imagine Kasich’s support sinking much lower than it already is; he’s polling at just 3 percent in Iowa. But watch what happens in New Hampshire, where Kasich polls considerably better at 13 percent.

And to no one’s surprise, the Times also endorsed Hillary Clinton in the Democratic race.