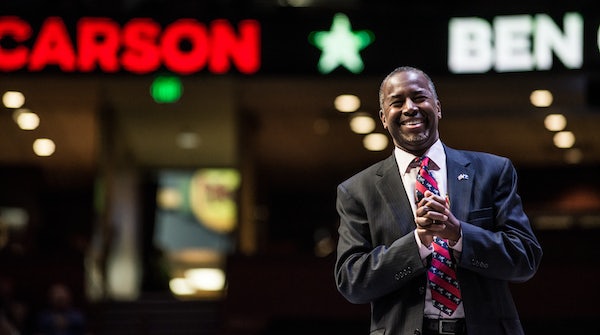 One of the curious stories about Iowa is Carson, who should be doing well here but already seems a spent force. With his pitch aimed squarely at Christian conservatives, Carson would seem like an Iowa natural. And only a few months ago he was surging in the polls and was poised to be Donald Trump’s most serious rival. But now Carson is fourth in the polls with only 7.7 percent. What went wrong?

An article at Think Progress offers at least one clue. It turns out that Carson’s campaign is great at raising money. Carson raised more than $22.6 million in the last quarter of last year, more than any of his rivals. But the money was spent close to home. “The campaign spent more than $27 million over that period. $4.7 million of that went to Eleventy Marketing Group, mostly for its ‘digital media/web service,’” reports Josh Israel. “The Akron, Ohio-based company president, Ken Dawson, is also the Carson campaign’s chief marketing officer.” Dawson was only one of several Carson associates who got lucrative contracts from the campaign.

Perhaps Carson could have made a comeback if his team was more concerned about winning the election than enriching themselves.