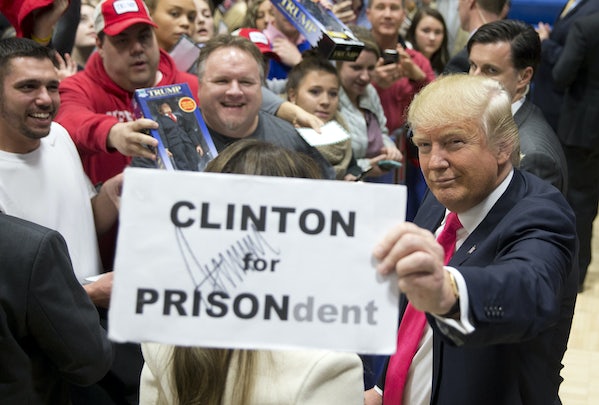 Donald Trump loves this sign, even though it doesn’t make any sense.

According to Business Insider, Trump was rather taken with a sign reading “Hillary Clinton for Prisondent” at a rally in Iowa, and held it up for multiple photographs.

This sign is bad. If it said “Hillary for Prison” that would sort of make sense, except you don’t run for prison. If Clinton had a policy that we should put a bunch of dents in prison walls, it would make a little bit more sense, but it should still say something like “Hillary Clinton for President—because she’ll dent the shit out of some prison walls!”

“Hillary should go to the prison, not the White House” doesn’t quite have the ring that the sign-maker was going for, but sometimes it’s better to be right than clever.

“Prisondent” does not work as a pun or a portmanteau.