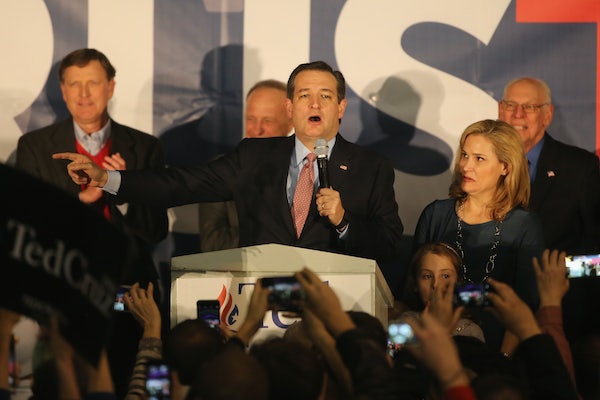 In his victory speech, Ted Cruz mistakes Iowa for Cleveland.

Even in victory, the senator from Texas just couldn’t win. Why? It’s what we’ve been told, again and again. He is unbearable.

Cable news networks aired 32 minutes of the Republican senator’s Iowa caucus victory speech on Monday night. He wasn’t done, but that’s all they could stomach. Even Fox News, the Republican house organ, cut into his speech to go to Bernie Sanders.

He started well, invoking the Almighty early and often in a clear signal to the Evangelical voters who fueled his win. “God bless the great state of Iowa!” he began. He later cited Psalm 30:15 to encourage those conservatives who were despondent during the Obama years: “Weeping may endure for a night, but joy cometh in the morning.” He hit a lot of key notes for his constituency: make them believe supporting an Ivy League-educated U.S. senator is “grassroots,” mention Ronald Reagan repeatedly, make up stuff about their eroding rights, tell them that they “scare” Washington. Checks, all around.

But he just kept going. And going.

Cruz, tonight, seemed to mistake Iowa for Cleveland, the site of the Republican national convention this summer. Sure, he won Iowa, but it’s hardly been a predictive state when it comes to the Republican nominee. Republicans who are for Cruz are surely buzzed, but he also managed to show his biggest weakness.