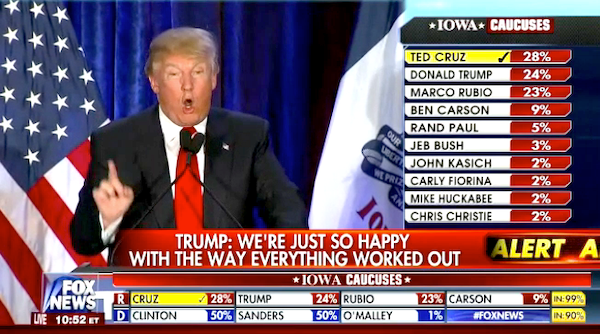 Donald Trump just disappointed us for a second time tonight by not throwing a tantrum over losing Iowa.

It was a surprising reversal. In November, when Ben Carson briefly pulled ahead, Trump ranted, “How stupid are the people of Iowa?” Earlier in the fall, Trump warned, “Now if I lose Iowa, I will never speak to you people again, that I will tell you.” Not tonight. “I think I might come here and buy a farm—I love it,” Trump said. Those who’ve been following the election closely might have been hoping for something more spectacular, given that Trump said he could shoot someone and still not lose.

Even so, Trump’s spin was telling. He’s spent his entire campaign selling himself as the overdog—”very rich,” “very good-looking,” “very smart” and so on. With his second-place finish, he tried to claim the title of underdog. “I was told by everybody, “Do not go to Iowa. You could never finish even in the top 10.’ They said, ‘Don’t do it.’ I said, ‘I have to do it.’”