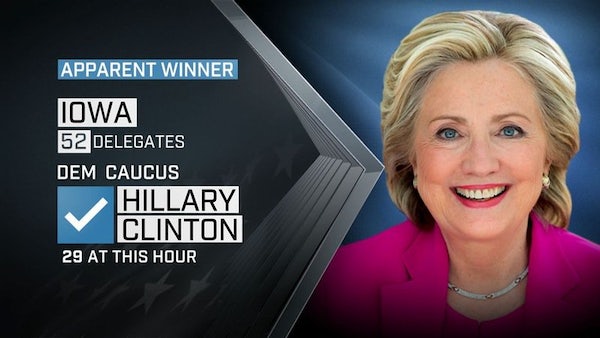 Shortly before 3:00 am local time on Tuesday morning, the count was finally done in Iowa. MSNBC declared the former secretary of state the “apparent winner” of the 2016 Iowa Democratic Caucus in the narrowest result in party history. She defeated opponent Bernie Sanders by five votes, 700-695, becoming the first woman to ever win an Iowa Caucus.

Of the national delegates at stake, Clinton won 29; Sanders, 21. Per the state Democratic Party statement, Clinton was awarded 699.57 state delegate equivalents; Senator Sanders got 695.49. The presence of Martin O’Malley in the race mattered, after all. The former Maryland governor, who suspended his campaign on Monday night, earned 7.68 state delegate equivalents, more than the difference between Clinton and Sanders. The only remaining outstanding delegates, in the Des Moines precinct, wouldn’t make up the Sanders deficit.

The Clinton campaign released a statement that read, in part, “After thorough reporting—and analysis—of results, there is no uncertainty and Secretary Clinton has clearly won the most national and state delegates. Statistically, there is no outstanding information that could change the results and and no way that Senator Sanders could overcome Secretary Clinton’s advantage.”

Shortly after landing in New Hampshire, Sanders spoke to MSNBC reporter Kasie Hunt. When asked whether he would contest the vote count, he said, “Honestly, we just got off the plane and we don’t know enough to say anything about it.”

This has been updated.