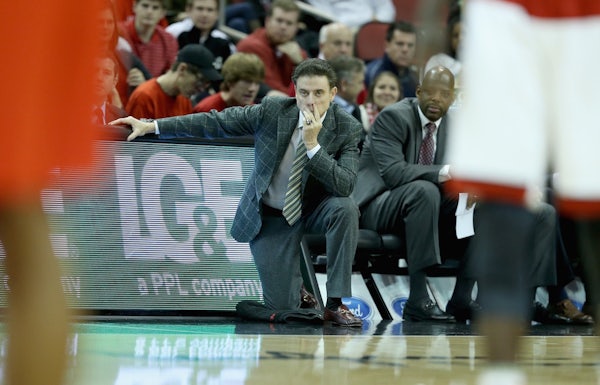 The University of Louisville’s self-imposed ban on the postseason is weak as hell.

On Friday afternoon, officials from the University of Louisville announced that they were imposing a one-year ban on the men’s basketball program from competing in any postseason tournaments for their role in an escort scandal wherein several women were paid thousands of dollars and given other gifts in exchange for sex with players and potential recruits. The NCAA has launched an investigation, which is still ongoing, but according to U of L President James R. Ramsey, sufficient evidence has been presented that points to wrongdoings by the university and men’s basketball team.

The ban is a significant blow to the current group of Cardinals players—in particular for two seniors who transferred into the university specifically to have one last shot of making the tournament—but it’s barely a slap on the wrist for the program as a whole. Limiting the ban to one year ensures Louisville won’t lose out on top recruits or lose current players to transfer, and it completely side-steps the role that longtime head coach Rick Pitino played in the scandal. Since news of the allegations first broke, many have called for Pitino to resign or be let go by the university.

The NCAA could still hand down punishments of its own at the conclusion of it’s investigation.