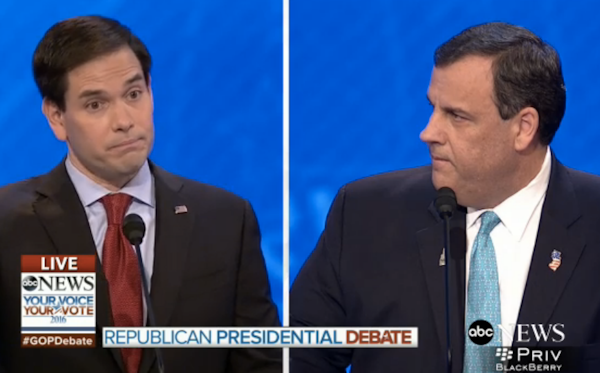 The moderators asked Rubio about what achievements he could offer up as proof that he’s qualified to be president. After listing a few things he’s done in his career (“protecting the people of Florida from eminent domain abuse”), he spun off into a rant about how Joe Biden has been around for “a thousand years” but no one wants him to be president (not exactly true). He then launched a second rant about how President Obama’s list of achievements are actually evidence that he’s trying to turn the country into a worse version of itself.

It was an obvious—and clumsy—pivot to a non sequitur talking point, and Christie wasn’t having any of it. “That’s not leadership, that’s truancy,” he said of Rubio’s Senate record.

Rubio tried to rebut Christie by pointing out that Christie didn’t return to New Jersey during the last snowstorm. “They had to shame you into going back!”

“You know what the shame is, Marco: that you would actually criticize someone for showing up to work,”said Christie.

Their back and forth descended into chaos as they talked over each other, Rubio about Obama, Christie calling out Rubio for his “memorized 25-second speech.”

“It gets very unruly when he gets off his talking point,” Christie said.