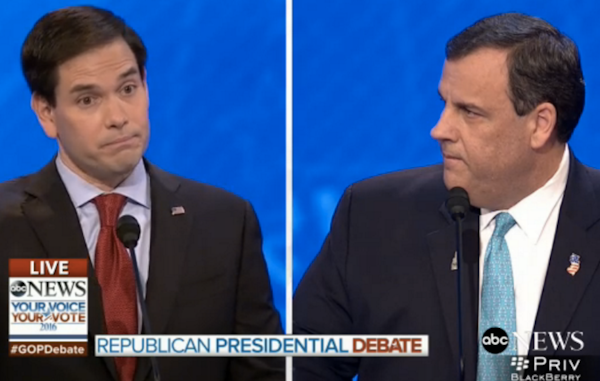 Chris Christie spent all week talking about how he was going to own Marco Rubio at tonight’s debate.

And that’s exactly what happened.

On Tuesday, Christie told New Hampshire voters that Rubio was “the boy in the bubble,” an unprepared, unqualified candidate who was sheltered by his advisers. He also said that Rubio was in for “an interesting week.” Then he said this:

“It’s time for him to man up and step up and stop letting all of his handlers write his speeches and handle him, because that’s what they do, that’s what you have to do for somebody has never done anything in their life.”

That’s, to a T, exactly how Christie went after Rubio at tonight’s debate. When Rubio used an attack on Christie that he had used in stump speeches, Christie sprung into action:

“That’s what Washington, D.C., does. The drive-by shot at the beginning, with incorrect information, and then the memorized 25-second speech that his advisers gave him. ... The 30-second speech doesn’t solve one problem.”

The most amazing thing, though, wasn’t just that Rubio fell into Christie’s trap, it was that he fell into a trap that Christie was talking about setting all week.