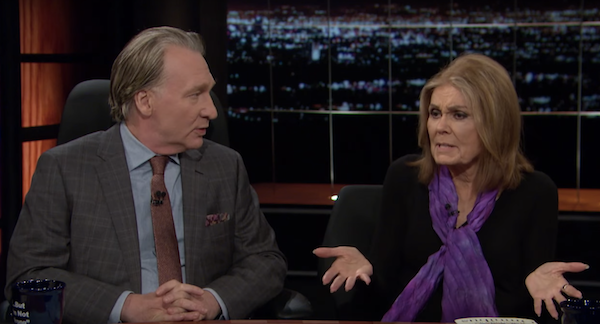 Gloria Steinem has been much criticized for suggesting on Bill Maher’s show that young women are supporting Bernie Sanders because “when you’re young, you’re thinking, where are the boys? The boys are with Bernie.” On her Facebook page, Steinem has offered a quasi-apology suggesting that she both misspoke and has been misunderstood:

In a case of talk-show Interruptus, I misspoke on the Bill Maher show recently, and apologize for what’s been misinterpreted as implying young women aren’t serious in their politics. What I had just said on the same show was the opposite: young women are active, mad as hell about what’s happening to them, graduating in debt, but averaging a million dollars less over their lifetimes to pay it back. Whether they gravitate to Bernie or Hillary, young women are activist and feminist in greater numbers than ever before.

These remarks are gracious in acknowledging the legitimate grievances animating young women, so even if this isn’t a full apology, it deserves to be the last word in the matter.