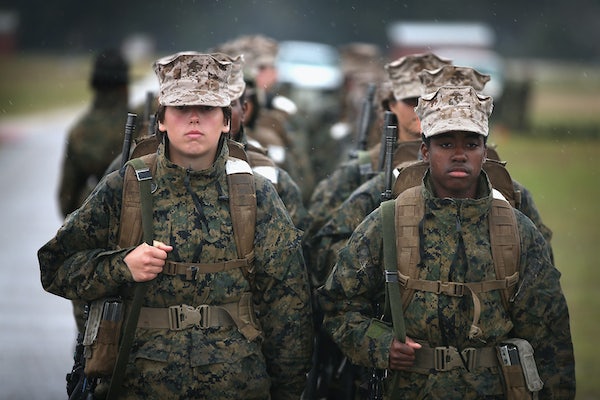 Accepting that women can be drafted into the military has been a silent revolution.

Back in the 1970s, when there was a big push to ratify the Equal Rights Amendment (ERA), critics argued that this would allow women to be drafted into the military. Even staunch feminists who lobbied hard for the ERA had this worry. As Betty Freidan noted in her memoir Life So Far, “The only ERA issue I had a hard struggle with was the draft. ... ‘Well, do you want women to be drafted?’ I would be asked time and again. Now I could not see marching with a banner saying I wanted women to be drafted. I had been very opposed to the Vietnam War, after all. But I worked out that while I was not for anybody being drafted, if there was again such a thing as a just and necessary war like World War II, then there would be no reason for women not to be drafted.”

But what was once seen as an extreme feminist position is now accepted by most conservatives. At Saturday’s Republican debate, candidates were asked about women being registered for the selective service, and all who were asked accepted this on principle. Yesterday, Ted Cruz opposed extending the draft to women, but he seems to be a minority in his party. Of course, the army is now all-voluntary. But that’s by no means a permanent condition. It’s a measure of a certain kind of progress that the idea of drafting women is no longer controversial.