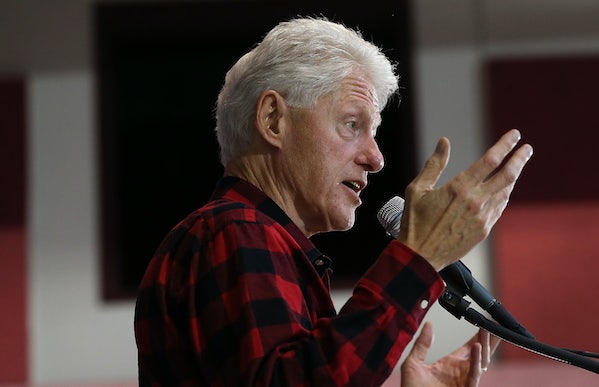 The attack came yesterday at a modestly attended event at a junior high school in Milford, New Hampshire, where the former president also accused the Sanders campaign of hypocrisy and subterfuge.

Referring to Sanders’s claim that Hillary Clinton has been compromised by her ties to Wall Street and the Democratic establishment, Bill noted a CNN report about Sanders’s fundraising prowess at 1 percent haunts like Palm Beach and Martha’s Vineyard. “Anybody who takes money from Goldman Sachs couldn’t possibly be president,” Clinton mockingly said. “He may have to tweak that answer a little bit, or we may have to get a write-in candidate.”

Referring to the Sanders campaign’s breach of the Clinton campaign’s voter data in the fall of 2015, Bill likened it to the theft of the car, saying the Sanders camp’s excuse was that the Democratic Party had left “the keys in the car, and all I did was drive off.”

But he perhaps saved his toughest words for Sanders’s online supporters, derisively known in some quarters as the Bernie Bros, saying Hillary and her women supporters “have been subject to vicious trolling and attacks that are literally too profane often, not to mention sexist, to repeat.”

The attacks, reminiscent of his controversial broadsides against Barack Obama in the 2008 primary, come as his wife trails badly in the polls leading up to New Hampshire’s Tuesday primary.